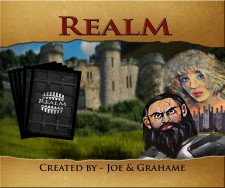 We've had great feedback about the card game so far from kids and adults. The kids handle defeat if they lose, (like a medieval knight in a chivalrous way) but the adults gloat over victory and become grumpy sore losers and desperately want to play again, which is a good thing?

When adults play the EVIL deck it's worse, they get into character! - aaaaargh!

PREVIEW HOW TO PLAY THE GAME